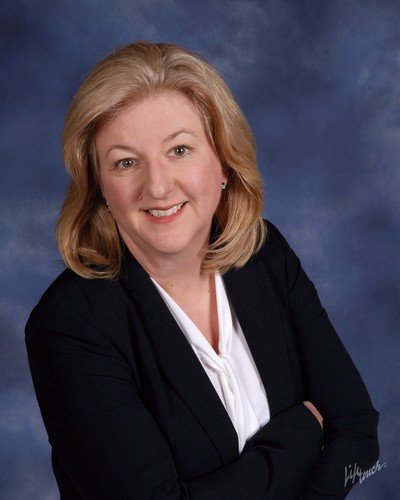 Originally from Monrovia, Indiana, Lisa Main moved to Atlanta, GA in 1998. She and her husband, Eric live in unincorporated Decatur. Lisa and Eric were confirmed and became members of St. Bede’s Episcopal Church in 2002. During her time at St. Bede’s, Lisa has served as a Godly Play Sunday School teacher, on the Children and Youth Education Committee, and the Altar Guild. She is currently the Secretary for St. Bede’s Endowment Fund Committee and a Lay Eucharistic Minister. She is a member of the Order of The Daughters of the King and graduated from the Education for Ministry (EfM) program in 2014. Lisa’s sons, Jacob & Harrison participated in St. Bede’s youth programs including J2A and served as acolytes and crucifers.

Lisa is an advocate for the LGBTQ+ community. She and Harrison recently participated in the Diocese of Atlanta’s panel discussion, “An Introduction to Ministry with LGBTQ+ People”.

Lisa earned a Bachelor’s degree from Mercer University in Atlanta. She works as the Operations Manager at Nease, Lagana, Eden & Culley, Inc. (NLEC), a life insurance advisory firm in Sandy Springs, GA. She holds a number of life insurance and financial services industry designations. She is a member of the Atlanta Chapter of the Society of Financial Services Professionals and the Georgia Planned Giving Council.

Lisa and Eric are avid Atlanta United FC fans and enjoy exploring Atlanta’s PATH trails or hanging out on a patio with their two Boston Terriers, Gabby & Stella.