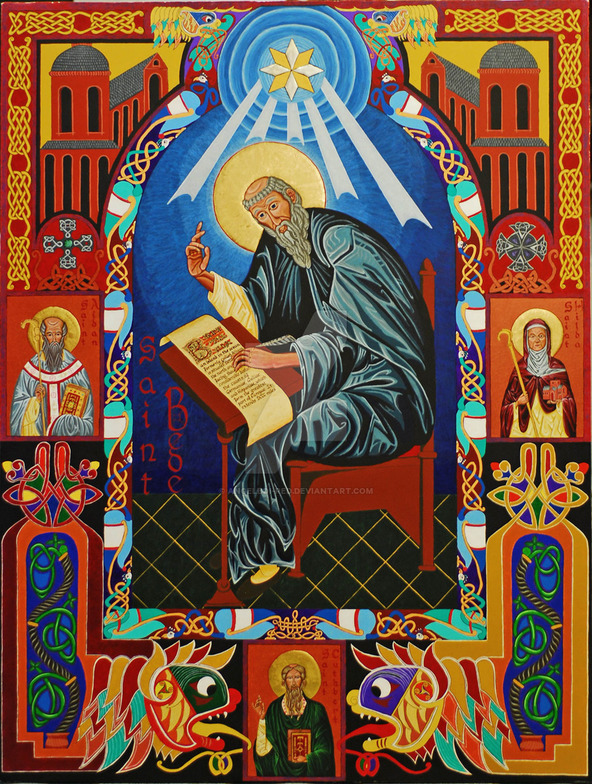 Bede the Venerable lived his life in the darkest of times and was indeed a light shining in that darkness. Bede loved the Lord Jesus and devoted his life to the study and translation of Scripture. He himself commented on over twenty-five Books of Scripture. As the barbarians in Rome were burning books, Bede was recording them.

In Bede's commentary on Revelation, he praised Jesus as "The Morning Star." These words form the focus for the center of our Altar Cross. It is our conviction that the words of St. Bede incorporated into this sculpture are exhibited in only two places in the world: over the tomb of the Saint in Durham, England, and in our nave over the altar where we meet our Lord.

Christ is the Morning Star who when the night of this world is past brings to his saints the promise of the light of life and opens everlasting day.   Bede: Revelation 2:28

The Icon of the Venerable Bede shown here was written by Br. Kenneth Hosley, OPC, of the Order of St. Anthony the Great in commemoration of the Jubilee Year (2010) of St. Bede's Episcopal Church, Atlanta, Georgia.

The central figure is St. Bede the Venerable.  He is surronded by ornamentation from the Book of Kells and the monasteries of Jarrow and Wearmouth in which he lived as a monk and priest. The inset icons are of Sts. Aidan of Lindisfarne, Hilda of Whitby, and Cuthbert.  Bede is illuminated from above by Christ the Morning Star, just as Bede referenced in his famous work The Ecclesiastical History of the English People, which he is shown here writing. Each saint is represented in the colors of the liturgical seasons which follow England's transition from Celtic Christianity that came from Ireland into the Roman form that came from Europe.  It is this story of transition that Bede so remarkably documented in his Ecclesiastical History.